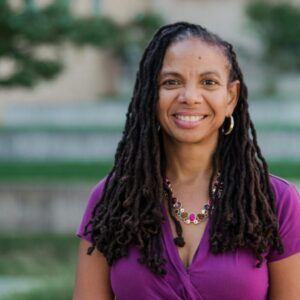 Kimberly Moffitt is the new dean of UMBC’s College of Arts, Humanities, and Social Sciences (CAHSS). Moffitt, a professor of language, literacy, and culture (LLC) and affiliate professor of Africana studies, has served as interim dean since August 2020, leading CAHSS through the challenges of COVID-19 while achieving several notable milestones.

A media critic whose research focuses on mediated representations of marginalized groups as well as the politicized nature of Black hair and the body, Dr. Moffitt has published several articles and book chapters, as well as five co-edited volumes, including Michelle Obama and the FLOTUS Effect: Platform, Presence, and Agency (Lexington Books, 2019), Gladiators in Suits: Race, Gender, and the Politics of Representation in Scandal (Syracuse University Press, 2019), among others.

Her latest work explores the black body in Disney programming and the impact of colorism on Black teens. Dr. Moffitt often writes op-ed articles for the Baltimore Sun and is a frequent guest on local public radio, television, and Internet broadcasting programs.

Dr. Patrice McDermott serves as vice provost for faculty affairs at the University of Maryland Baltimore County (UMBC).  Within that capacity, she oversees a wide range of institutional change projects including the Gates Foundation t-STEM Partnership, the NSF Innovation through Institutional Integration Grant and the ADVANCE Program. She also serves as senior scholar at AAC&U where she works on issues related to recruiting, advancing and retaining URM women faculty in STEM.

Dr. McDermott received her Ph.D. in American Studies from the University of Maryland College Park.

Dr. Psyche Williams-Forson is Professor and Chair of the Department of American Studies at the University of Maryland College Park. She is an affiliate faculty member of the Theatre, Dance, and Performing Studies, the Departments of Anthropology, African American Studies, The Harriet Tubman Department of Women, Gender, and Sexuality Studies, and the Consortium on Race, Gender, and Ethnicity. She is a material culturalist who examines the lives of African Americans living in the United States from the late 19th century to the present.

You can learn more about Dr. Williams-Forson here: https://amst.umd.edu/directory/psyche-williams-forson 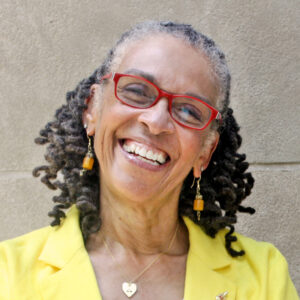 Bonnie Thornton Dill was appointed dean of the University of Maryland’s College of Arts and Humanities in 2011. She joined the university in 1991 as professor and served as chair of the Harriet Tubman Department of Women, Gender, and Sexuality Studies (formerly the women’s studies department) for eight years. A pioneering scholar on the intersections of race, class and gender in the U.S. with an emphasis on African-American women, work and families, she is founding director of both the Center for Research on Women at the University of Memphis and the Consortium on Race, Gender, and Ethnicity at UMD. Her scholarship includes three books and numerous articles.

Dr. Chester received her doctoral degree in Developmental Psychology from Pennsylvania State University.  Her research investigates the development of family processes and parent socialization practices during early developmental periods in an effort to understand the factors which affect child development. Her more recent work has investigated how disenfranchised youth access resources and the implications these process have on development. 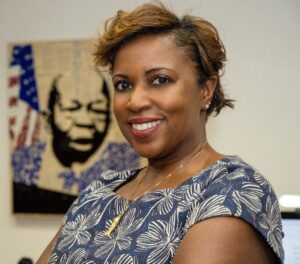 Dr. (Lessane) Dockery is a scholar and an international commentator, consulted for her expertise on diversity, equity and inclusion, social justice, and racial inequity.

Previously, she served as Associate Dean for Strategic Planning and Community Engagement and Executive Director the Avery Research Center for African American History and Culture, both at The College of Charleston. As Co-Principal Investigator of the College of Charleston’s Race and Social Justice Initiative (RSJI) Dr. Dockery co-wrote The State of Racial Disparities in Charleston County, SC 2000-2015.

Professor and author, her most recent book, The Truth About Slavery and the Making of the United States: African Americans from 1526-1850, will be released fall 2022 by Knopf Books for Young Readers. 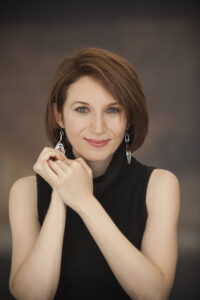 Dr. Tatiana Mann is a passionate advocate for the arts & music education. A classical pianist and professor of piano, Dr. Mann has performed and taught throughout the US and in Europe. As an arts administrator with more than 20 years of experience, Dr. Mann was the founding executive director of the Wildwood Academy for Music and the Arts (WAMA) in Little Rock, AR – a summer program that provides arts and music instruction, with a focus on children with limited opportunities. In 2021 she founded a registered chapter of American Association of University Professors (AAUP) and advocated for freedom of speech on behalf of her colleagues in TX.  As a pianist, most recently Tatiana can be heard performing works by Kernis, Copland and Prokofiev on the album Finding Home, released on SONY Classical Korea in 2022.  Dr. Mann holds graduate degrees in piano performance from the University of MN (DMA), London’s Royal Academy of Music (PGDip) and Manhattan School of Music (MM).

Professor Carolyn Forestiere has been a member of the Department of Political Science at UMBC since 2004. She is the author of Beginning Research in Political Science with Oxford University Press (second edition released in 2021) and was co-editor of the 2018 publication of Politica in Italia (Il Mulino). Her work in comparative politics has been published in outlets such as the International Political Science Review, Politics and Policy, Party Politics, and Journal of Legislative Studies. Forestiere teaches courses in undergraduate research methods and comparative politics at UMBC; she has won her Department’s Teacher of the Year award six times and in 2019 was named UMBC’s Presidential Teaching Professor. She has also led several summer study abroad programs in Italy and the U.K. and has been Faculty Chair of the UMBC Undergraduate Research Award committee since 2018.

You can learn more about Dr. Forestiere here:
https://politicalscience.umbc.edu/faculty-1/dr-carolyn-forestiere/ 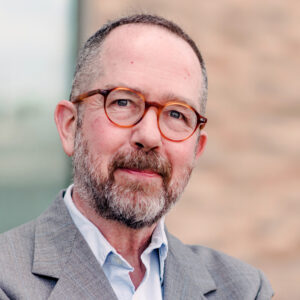 Timothy Nohe is a 2020-2022 ACE Fellow, university leader and educator. He works as an artist and composer engaging traditional and electronic media in civic life and public places. Committed to international engagement, he has made significant ties to Australia as a Fulbright Scholar and editorial board member, and has exhibited and performed in Europe.

Nohe has exhibited and performed his work in a range of national and international venues: ISEA; Ars Electronica, Linz; the Danish Institute of Electro-Acoustic Music, Århus; Museu da Imagem e do Som, São Paulo; the Centre for Contemporary Arts, Glasgow; the Irish Museum of Modern Art, Dublin, the Museum of Contemporary Art, Sydney; the Oxfringe Festival, Oxford; the Baltimore Museum of Art; the Smithsonian Institution, Washington, D.C.; the Museum of Jewish Heritage, New York, and The Kennedy Center, Washington, D.C.

Nohe is a 2021 – 2022 ACE Fellow, and was the founding Director of the Center for Innovation, Research and Creativity in the Arts (CIRCA).

Dr. Banks’s career in Higher Education spans 36 years. His distinguished service includes roles such as the Resident Director, Student Activities, and Recreation Coordinator at Polytechnic University, Director/Dean of Residential Life and Student Development at Monmouth University in NJ, as well as the Assistant VP and Dean for Students at the University of South Florida.

In August of 2012, Dr. Banks was appointed as the Vice President for Student Affairs at Morgan State University. He is responsible for overseeing 10 units supporting the “extended classrooms” where students are nurtured in preparation to “lead the world”.

Dr. Banks serves an Associate Board Member for the Y of Central Maryland, and is on the Executive Board of Baltimore Collegetown.

Donna Howard was appointed Vice President of Institutional Advancement at Morgan State in 2019.  She has over twenty years of experience in the areas of development and institutional advancement.

Prior to coming ton Morgan in 2011, she served as the National Director of Individual and Planned Giving at the United Negro College Fund and Director of Development at the University of Maryland School of Social Work.

Dr. Kara Turner is Morgan State University’s inaugural Vice President for Enrollment Management and Student Success. She was appointed to the position July 1, 2016. Her major responsibility at Morgan is to provide strategic leadership to the University’s enrollment management efforts, including overseeing six student services offices (the Offices of Undergraduate Admission and Recruitment, Financial Aid, Student Success and Retention, and the Center for Academic Success and Achievement, Office of the Registrar and the Bear Essentials One Stop Student Services Center). Under her leadership, numerous enhancements to student services have been implemented and the University has experienced sustained increases in enrollment, retention rates and graduation rates.

Dr. Zambrana is a Distinguished University Professor in the Harriet Tubman Department of Women, Gender and Sexuality Studies, Director of the Consortium on Race, Gender and Ethnicity and affiliate Professor of Family Medicine at the University of Maryland, Baltimore, and School of Medicine. Her scholarship applies a critical intersectional lens to structural inequality and racial, Hispanic ethnicity, gender and economic disparities in population health and higher education trajectories. Dr. Zambrana is a nationally recognized scholar and has published widely on health inequity.  Her latest book is Toxic Ivory Tower: The Consequences of Work Stress on the Health of Underrepresented Minority Faculty (Rutgers University Press, 2018). Her most recent major awards include the American Public Health Association 2021 Lyndon Haviland Public Health Mentoring Award. For the 2021-22 academic year, Dr. Zambrana was selected as the Distinguished Research Fellow at the University of Texas Austin, Latino Research Institute.

You can learn more about Dr. Zambrana here: https://socy.umd.edu/facultyprofile/zambrana/ruth 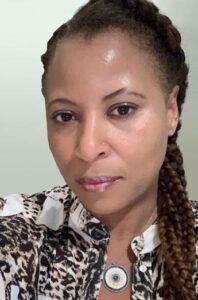 Marisa Parham is Professor of English and Digital Studies at the University of Maryland at College Park, where she directs the African American Digital and Experimental Humanities initiative (AADHUM), and is associate director for the Maryland Institute for Technology in the Humanities (MITH). She also co-directs the Immersive Realities Lab for the Humanities (irLh), and currently chairs the ACLS Commission on Fostering and Sustaining Diverse Digital Scholarship. Parham’s current teaching and research projects focus on texts and technologies that problematize assumptions about time, space, and bodily materiality. Recent examples of this work include Sample | Signal | Strobe: Haunting, Social Media, and Black Digitality, and the digital-interactive scholarly essays “Breaking, dancing, making in the machine” and.break .dance, which is also anthologized in the Electronic Literature Collection (ELC4) and was a 2021 honorable mention for the N. Katherine Hayles award. Prior to coming to UMD, Parham was Professor of English and Faculty Diversity and Inclusion Officer at Amherst College, and a former director of Five College Digital Humanities. She is currently at work on Black Haints in the Anthropocene, a book-length digital-interactive narrative concerning memory, digitality, and environmental experience, and ConvocationAR, an XR-driven humanities-computing project.

You can learn more about Dr. Parham here: https://english.umd.edu/directory/marisa-parham