Professor Bhalla teaches both introductory and upper-level core courses in the American Studies department on Asian American literature and culture, multiethnic literatures and cultures, and post-1965 narratives of immigration to the United States. She received her PhD in English Language and Literature from the University of Michigan.

You can learn more about Dr. Bhalla here:
https://amst.umbc.edu/faculty-and-staff/bhalla/ 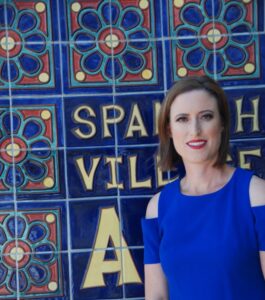 Dr. Hogan studies the cultures, words, and images of contemporary Spain and Latin America. Within such diverse cultural production, she is most fascinated by the articulations of power, observing how symbols and narratives travel and shape-shift across texts, temporalities, and terrains. Her research specializes in contemporary Iberian cultural production with particular interest in the child and the patriarchal corpse as biopolitical figures, gynocentric filmic representations of and by women, and the uses of comedy and satire for social justice. Dr. Hogan’s broader areas of inquiry span time, place, discipline, and media from 17th century Spain to contemporary Latin American and involve transnational screen arts, intercultural pedagogy, and videographic criticism.

You can learn more about Dr. Hogan here:
https://mlli.umbc.edu/dr-erin-k-hogan/

Eve Muson is an Associate Professor of Theatre and Chair of the Department of Theatre at University of Maryland, Baltimore County. Her professional directing credits include Inexcusable Fantasies (Strand Theater, Prague Festival Fringe, FringeNYC), Speech & Debate and Las Meninas (RepStage), Venus, Big River, and Peter Pan (Olney Theatre Center,) and many productions at Boston Playwrights Theatre, American Stage Festival, and Edinburgh Festival Fringe. She is the principal director for GRRL Parts – UMBC’s festival of new plays by women and serves as a director in new play development at WordBRIDGE Playwrights Laboratory.

She has been cited three times  for Outstanding Direction by the Kennedy Center/American College Theatre Festival for her work on Un Tango En La Noche(Boston University) and Las Meninas (UMBC,) and Girls on a Dirt Pile (UMBC.)

You can learn more about Professor Muson here:
https://theatre.umbc.edu/about-us/faculty/eve-muson/

Elizabeth Patton is an Associate Professor of Media and Communication Studies at the University of Maryland, Baltimore County. She is the author of Easy Living: The Rise of the Home Office (Rutgers University Press, 2020). Her research focuses on discourses of gender, race, and class in the history of media, representations of urbanism and suburbanism in popular culture, and the impact of communication technologies on space and place. Liz’s current book project, Documenting Black Leisure as a Form of Resistance, examines the history of Black leisure and tourism in the US through media of the Jim Crow era. Recent research can be found in edited volumes such as Media Crossroads: Intersections of Space and Identity in Screen Cultures (Duke University Press, 2021) and Race and the Suburbs in American Film (SUNY Press, 2021). She currently serves as managing co-editor of Mediapolis: A Journal of Cities and Culture.

You can learn more about Dr. Patton here:
https://mcs.umbc.edu/elizabeth-patton/ 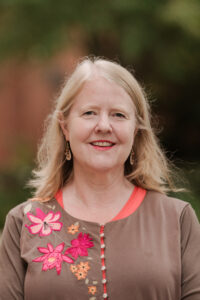 Dr. Orianne Smith is Associate Professor of English, Graduate Program Director, and Affiliate Associate Professor of Gender, Women’s and Sexuality Studies, Her book, Romantic Women Writers, Revolution and Prophecy: Rebellious Daughters, 1786 -1826, was published with Cambridge University Press (2013; paperback 2015). This book received the First Book Award from the British Association of Romantic Studies in 2015. She is the editor of Mary Robinson’s Hubert de Sevrac (1796), published by Pickering & Chatto in 2009. Her current book project traces the gendered and socio-historical significance of the Romantic preoccupation with magic and witchcraft.

You can learn more about Dr. Smith here:
https://english.umbc.edu/core-faculty/orianne-smith/